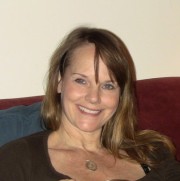 With her Masters in International Business from the University of South Carolina, "Friend of the Devil" is her first foray into film production.  Working in Uruguay and Italy for the five years following her Masters studies, she returned to Texas to start her own import business.  She currently is developing future writing and film projects for Lean Dog Productions.

For screenwriter, director and actor Eric H. Heisner, the passion he possesses for working in the arts and entertainment seems to be in his blood. His grandfather played piano for a silent movie house.  When EH was seven, his father began acting in “Wild West” and Civil War reenactment groups.

Soon, young EH was tagging along to the events and even videotaping some of the action. “I was too small to carry the camera around,” laughs Heisner. “Back then they were pretty big. So, my Dad set it on a tripod for me. Since I had to remain in a fixed position, I just did lot of zooms and pans!” It wasn’t long before he started participating himself in these presentations of living history played out before thousands of onlookers.

The experience enabled Heisner to learn how to use a wide range of guns, and safe yet effective sword-fighting techniques. The hands-on training was invaluable in preparing him for his work on both sides of the camera. His expansive repertoire of vintage weapons-handling skills now includes stage combat with a broadsword and rapier, the operation of vintage firearms, foil and sabre fencing, and cracking a bullwhip with precision.

As a child, “Raiders of the Lost Ark” was his favorite movie. “All of the old-time action really appealed to me,” shares Heisner. As for other films and television, he always preferred to watch Westerns and anything featuring horses. He was also drawn to actors like Errol Flynn, John Wayne and Jimmy Stewart.

In high school, Heisner got a small part in “Gettysburg” (1993), a film about the most critical battle of the Civil War. Portraying a cannon loader, he was able to put into practice some of the skills he had learned over the years in the historical reenactment groups. Over time, Heisner naturally began to lean towards creating movies that would reflect the values from a time when running from problems was not an option, and working through hardship forged good character.

In 1998, Heisner graduated with a Bachelor of Arts degree in Film from Columbia College in Chicago. He soon landed a job as an assistant location manager for the Chicago unit of the television medical drama "ER" on NBC. Two years later, he was hired as a production assistant for the John Cusack/Jack Black film, “High Fidelity.” In his spare time, Heisner continued to work on various independent film projects, started winning awards, and kept writing scripts. Within a few years, he moved to Los Angeles to be closer to the heart of the film industry.

When Heisner arrived in Hollywood, friends helped him get his first job as a script courier for Dustin Hoffman. He also eventually signed with an agent, and began going on auditions, which led his first acting jobs in town. Over the years he was cast as a British soldier in the Walt Disney Pictures’ mega-production of “Pirates of the Caribbean 3: At Worlds’ End” starring Johnny Depp and Orlando Bloom. He was also hired to portray first a cowboy, and then the outlaw who shot President James Garfield in “Wild West Tech” on the History Channel.

In April 2007, Heisner celebrated a first place win at "The Written Image Awards" in Chicago for his full-length film screenplay “T.H. Elkman,” an 1870s American Western.  The prize money was put towards funding his current project, a television pilot “Friend of the Devil”.

With all film and television endeavors, Heisner says that his goal is to create entertainment with family and friends in mind. “I have always been drawn to making Westerns and period movies set in an earlier era when accountability and self-reliance were virtues to be admired,” confides the filmmaker.  "I think films about the resilience of the human spirit, and the importance of integrity and strength of character, are themes that speak to everyone.”  Heisner says these types of movies will always be in demand because they reflect positive messages and there is a scarcity in the supply of films an entire family will find appealing.