Currently being filmed in Llano, Texas

The Academy Nicholl Fellowship in Screenwriting 2014 competition list of finalists.  Of the 7,511 entries they accepted this year, EH was proud to find his screenplay received high marks:  His Western story Mexico Sky placed among the top 20% of all enteries

Mexico Sky  (Western/Adventure) - When the West begins to crowd with civilization, a well intentioned con-artist and his female partner must make their way when they end up with the loot from a foiled bank hold-up.

The Austin Film Festival & Writer's Conference announced that of the 6,764 entires this year EH's screenplay Cicada placed in the top 15% of all enties.  Competiton Director - Matt Dy handwrote a message:  "Our Readers thought your story was Thrilling, akin to a Coen Brothers' Film.  Good Luck with your Writing!"

Cicada (1970's Drama/Mystery) - A small desert community is unsettled from its routine when an old murder case based on lies and deceit is scrutinized by a resident who is closer to the incident than expected.

EH did a Teaser shoot for a Traditional Western titled "Saragosa".  Director/Producer Rey Ramirez cast EH as the lead character Orin McNeel.  More info can be found at the film's Facebook page "Saragosa.themovie".

While Hosting "Festival of the West" in Arizona, EH reconnected with the director of a new documentary on Western Film.  Partially filmed at the Lone Pine Film Festival, EH has a few nice clips about his passion for the Western.

The pitch trailers are finished for the Western/Zombie flick "Zombrero"!

Bullets will fly and flesh will be eaten!  - Viva Zombrero

Eric's original screenplay "Citation for Murder" made the second round of competiton at the Austin Film Festival & Writers Conference.

With over 6,500 submissions, being in the top 10% is a nice recognition of work. On the notification, Competition Director Matt Dy scribbled "P.S.  A well-told murder mystery!" 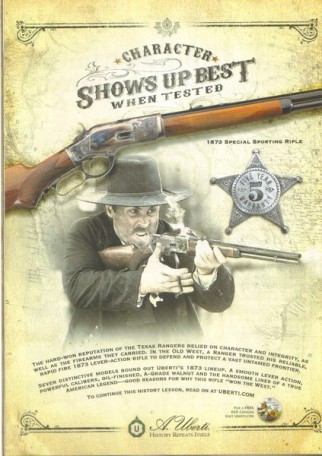 EH Heisner appears in the Uberti Firearms advertisement in the September 2012 issue of "True West Magazine".  The photo shoot for Uberti has been used in several Old West magazines.

"I got a call from renowned gun expert, Phil Spangenberger.  He said he was gathering a group of Old West Actors to model some firearms.  Several of us including my good friends Al Bringas and Wyatt McCrea (Joel McCrea's grandson) went out and handled some great guns and burned a lot of black powder."  - EH Heisner

EH acted in a Commercial spot for VW Up! in the European Market. He played a 70's movie star who runs out of gas in the desert.

"It was a great time in the vicinity of the location used in the Steven Spielburg film Duel.  I got to drive a 1970s Charger down the road and kick up some dust!" EH

The teaser pitch trailers for "Zombrero" are near complete and will be hitting the worldwide web shortly.  Stay tuned as EH blasts Zombies like ol' Duke did Indians in the 1950's!

The script by Barrett Stokes is complete and masterfully blends the passions of Western fans (cool guns & lots of shooting, horses, fights, great characters) and what Zombie fans love - Zombies! 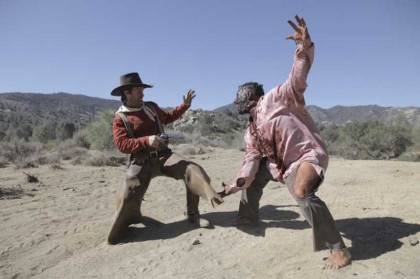 The Gary Hubb Western film "Road to Los Angeles".  EH plays the heavy in this one and gets to do a nice bit of horse acting. 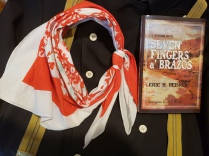